It’s 20 February 2020. A date I have saved preciously for some time. Tonight WhistlePig Whiskey from Shoreham Vermont USA will officially be launched at JD William’s Whiskey Bar in Amsterdam. Matt Rooney is hosting the Industry Launch as WhistlePig’s regional export manager and Bart van Veen – owner of independent importer and wholesaler Bart’s Bottles – is very pleased to be able to add an iconic whiskey to his portfolio.

WhistlePig Farm is situated in Shoreham Vermont and co-founded by my countryman Wilco Faessen from Sittard. WhistlePig whiskey is imported by Bart’s Bottles from Amsterdam. This evening six whiskeys will be presented for this industry launch tasting followed by a walking dinner. One of Antwerp’s top mixologists and owner of TapaBar, Andres Claeys, has accompanied Matt to take care of the cocktail session. Rooney has rooted in the Belgian scene for about ten years now and shows a good command of the Dutch language. He knows how to capture the attention of the Amsterdam bartenders and bar owners.

Up till Prohibition, rye whiskey was the leading the American whiskey category. From the 1930’s onwards this position was taken over by bourbon. The founders of WhistlePig and especially Dave Pickerell (former master distiller of Maker’s Mark) were able to lay their hands on quite a few wonderful barrels of rye whisky. At the moment, WhistlePig owns one of the largest reserves of super-premium Rye whiskey. Thanks to this, it is able to come up with an overall core range of 10-year-old rye whiskey and it goes up to 18 years. 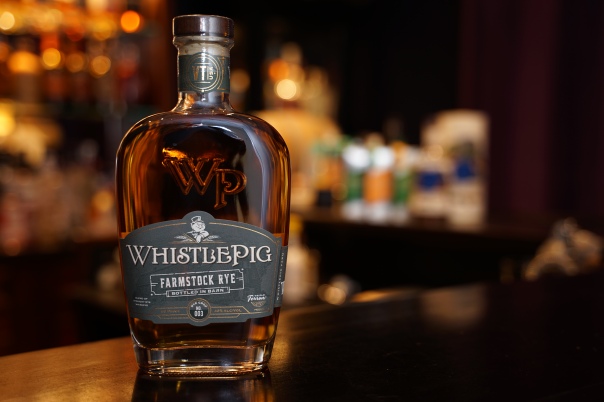 Matthew starts off with introducing the first dram, the WhistlePig Farmstock Crop 3. The grain used in this 003 is a 100% rye. We taste 52% of WhistlePig’s 3yr (non-sourced) whiskey, blended with 31% 6 year old and 17% 10 year old whiskey from Alberta, Canada. This three-year-old rye was grown and distilled on the farm. It’s diluted with water from the farm, Matthew adds. A medium, #3 to #4 char is used. The process of moving the barrels from the top of the rick-house to a lower floor, so called “heat cycling” – leads up to the spirit expanding into, and contracting out of the wood, pulling the natural sugars found in oak and imparting them into the whiskey. Matthew continues his master class by explaining the use of Vermont oak by WhistlePig. ‘Because the Vermont oak grows smaller and tighter than normal oak from the Appalachian Foothills Mountains. It gives a tighter grain pattern and therefore produces more natural sugar.

Tonight’s industry audience can’t wait to go for the second dram, the iconic WhistlePig 10 year old straight rye (50% abv). “Some barrels need more time to mature than others since the process is natural. When a barrel is at its peak it’s bottled. Some barrels may become over-oaked and will not be used for bottling. ‘A straight rye has to have a minimum of 4 years of maturation in order not to declare an age statement’, Matt says. The longer whiskey ages, the higher the abv will rise. This is due to the warm climate, which makes the water ‘sweat’ out of the barrel. Entry proof cannot legally be higher than 125 proof (62.5 % abv), otherwise the whiskey has to be diluted  too much during bottling. 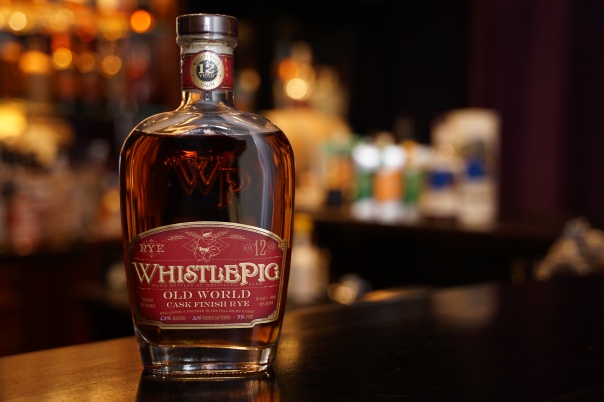 While people are still enjoying their WhistlePig 10, Matt and Bart are focusing on their third liquid beauty; a 12 year old rye with wine finishes (43% abv / 86 Proof). It’s quite a niche in the whiskey world to finish rye whiskey on several different barrels. This 12yr is finished on a combination of 63% Madeira, 30% Sauternes and 7% port. You get the creaminess and fruitiness from the Sauternes, while the port and the Madeira add depth, really a third dimensional flavor. The American agency TTB (Tax Trade Bureau) changed the law by saying that any whiskey that has been finished can’t be labeled as straight. ‘That means that this whiskey is not straight, however we abide by all other legal regulations- i.e. not adding color, flavor or anything else’. Matt says. 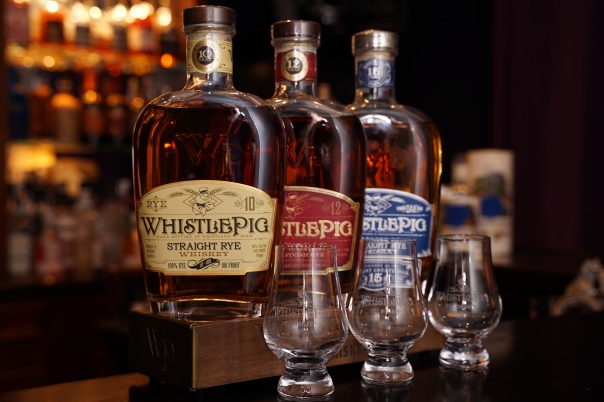 There are two different barrel programs at WhistlePig: the single barrels from the core range and the bespoke whiskies so to speak. ‘If you want a custom finish, it can be done. We have Bordeaux finishes, Barolo finishes, Amarone finishes, rum finishes, etc. you name it. There are all sorts of experiments going on at the farm’, Matt says. Time to move on to the 15 year old WhistlePig Straight Rye (46% abv / 92 proof), which is finished on Vermont oak. The bottle comes with a stopper, which is made out of pewter and is quite heavy. In order to declare an age statement, the whiskey must have been aged a minimum of said amount of time on a new, charred oak barrel.

The 18 year old is my next dram I’m really looking forward to. I am not disappointed. It’s a double malt: 79% rye, 15% malted rye and 6% malted barley. ‘The grains form a harmony that spans the flavor spectrum, at once soft and floral, rich and savory, and full of spice’, says the first whiskey blog that pops up on my phone. It’s described by some as an experiment in how grain affects flavor early in the whiskey-making process. This 18 year old expression is limited in quantity, but the distillery says it will be releasing it each year, so you can consider it part of the permanent collection. It’s packaged in a dazzling designed decanter adapted from the traditional WhistlePig bottle shape, and accompanied by a wonderful glass stopper pressed by hand by AO Glass from Burlington, Vermont.

Finally The Boss Hog VI, Samurai Scientist is poured. It’s the sixth installment in WhistlePig’s The Boss Hog line and hand bottled at 60.3% cask strength. Custom finished every year, and is the first American whiskey finished in Japanese Umeshu (plum wine) barrels. There’s a respectful silence in JD William’s Whiskey Bar when people watch the darker colour. I put my nose into the glass and find it amazing how the WhistlePig distiller has managed to camouflage the alcohol. The handmade pewter stopper is showing a pig dressed up as a samurai in memory of Jokichi Takamine. ‘That’s the ‘samurai chemist’ who taught koji fermentation to American whiskey makers in the 19th century’, says Jeff Kozak, WhistlePig’s CEO in a press release. The previous family members of The Boss Hog line have included The Spirit of Mauve, finished Calvados barrels, and The Black Prince, an award-winning rye finished in Armagnac casks.

Bart van Veen, owner of Bart’s Bottles and importer of WhistlePig in the Netherlands is enthusiastic about the way WhistlePig has been presented. ‘It’s a wonderful product and an asset to our portfolio. The WhistlePig taste blends in easily with the inquisitive Dutch palate’. While writing my impression of the evening Wilco Faessen texts about this memorable event. ‘It surely feels special bringing my baby home. The first launch in NY was special. London was crazy too, but nothing more special than having a launch in the Netherlands’.