Can one argue about flavour knowing that it is a subjective element ? If tasting is subjective, what do tasting notes add ? And how important is a common language in order to train our perception of taste ? In a quest for answers Fred Blans tastes some expert insights.

For quite some time I have feared I suffered from WFS, the whisky fatigue syndrome as described by Becky Paskin in Scotch.com. At tastings my focus is taken up primarily by analysing, classifying and applauding. All at the cost of real enjoyment.

Time to speak to professor Peter Klosse, a Dutch authority in the field of taste. If anyone can obtain a diagnosis he certainly can. He is a scientist at the University of Maastricht (Klosse got his PhD in Health Sciences), teacher at his own Dutch Academy for Gastronomy and professor of Gastronomy at the Hotel Management School in Maastricht. Klosse also owns his own hotel and restaurant De Echoput in Hoog Soeren. Next to this he has quite a few publications to his name that define his expertise: Smaak (1998), Smaakstijlen (2000), Het Proefboek (2003), Spelen met Smaak (2005), The Concept of Flavor Styles to Classify Flavors (thesis 2014) and Het nieuwe Proefboek (2014 with Angélique Schmeinck).’Nobody can have the same flavour and taste experience because our olfactory organ and the flavours we inhale every day are strongly attached to a personal experience of time and place.’

In Scotchwhisky.com cosmopolitan and famous whisky writer Dave Broom adds a few remarks to my predicament. ‘Education, culture and personal preferences define how we talk about our preferences which means that every language and culture should design its own flavour wheel’. Klosse agrees. ‘Our brains gather a huge amount of information around products. The more you taste a product and experience its essence the more information is added to your olfactory organs and the more subtle levels will be recognised. These are the levels and distinctions we talk about’. So, no scoring anymore at tastings notes ? ‘To a certain extent’, Klosse says. ’Tasting notes are not reliable. They are a subjective experience. Every writer of tasting notes is influenced in his or her own way’. Broom continues: ‘ Having a culturally specific set of wheels would help – and allow a shared language to be created’. Dutch scientist and whisky lover Jeroen Derks (The illusion of Liquor; A stimulating perspective on tasting, 2019) adds: ‘A shared (whisky) language would support our mutual understanding.’

The importance of a shared language is again stressed by Broom: ‘The more limited our linguistic base – and aroma map – the less able we will be to identify aromas’ and in this respect makes a reference to  the Austrian-British philosopher Wittgenstein who once said that ‘the limits of my language mean the limits of my world’. So is our language more limited when our general frame of reference is smaller? Derks and Broom both refer to a most interesting research by Ilja Croymans and Asifa Majid of the Radboud University of Nijmegen: Odor naming is difficult, even for wine and coffee experts.

In this research paper it is evident that wine and coffee experts are well equipped in their own field of expertise language wise, but they are no more accurate or consistent than novices when naming odours whenever they venture in another field. One of the conclusions might be that only expertise is not enough. An accurate command of language is required. So the necessity to work on a common language is there.

Why is it that certain tasting notes have our preference ? ‘This has to do with mastering the jargon, being able to give words to your tasting experience and the skill to write it down, your language skill’, Peter explains. ’This is quite an arbitrary process. If you use the accepted jargon, the lingua franca so to speak, then you’re the expert to many people; rather than using new words and expressions. Whereas somebody who is less fluent with words might be a far better taster’. This is when I decide to contact my next expert: whisky language wizard and Whiskyfun guest taster Angus MacRaild.

Angus is a man who knows how to choose his vocabulary when he answers my questions in a lengthy letter. His last words give me some reassurance. ‘We just need to remember not to take it all so seriously – it’s whisky’fun’ after all’. But Angus is a strong advocate for the writing of tasting notes because it is part of our whisky culture to inform each other he says. ‘We humans are social creatures and creating a communicative framework to express our passions and opinions with others is an inherently social thing to do’. Any differences in opinion are not to be found in the whisky itself for ‘a whisky can be broken down chemically in a laboratory and its flavour keytones and congeners identified and mapped. This is a whisky’s ultimate, scientific ‘objective’ truth’.

This is exactly the field of research of the Klosse Team. ‘The nature of human biology means we are heavily subjective in the way we assess both aroma and flavour’, Angus adds. ‘To efficiently describe the character of something in terms of its flavour or aroma I believe you need a combination of a good vocabulary and a good memory’. 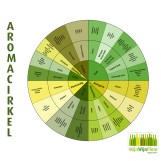 Comparing different flavour wheels gives me a feeling of unrest: searching for a system I get diversity and looking for an overview I get chaos. A plethora of wheels are filling my table: happily coloured whine wheels, whisky wheels, coffee wheels and aroma wheels. There is some overlap but also specific outlines and different set ups. We have a huge tendency to order our observations systematically, to classify and channel our findings in wheels, charts and lists.

Whisky lover and scientist Teemu Strengell clarifies a lot in his whiskyscience-blogspot. After having added a wheel for beer, chocolate, tequila, olive oil, cigars, cheese, body odour and off-odours up to the devil’s flavour wheel he says that ‘the bottom line is there are no really universal, constant and non-culture related descriptors or classifications for smells’. And on top of that mouthfeel, viscosity and texture are noted surprisingly seldom. Some wheels have apparently been made from the production point of view, such as the Dewar whisky wheel and to some extent the early version of Scotch Whisky Research Institute wheel. Probably the most detailed whisky flavour wheels used are the Revised Scotch Whisky Flavour Wheel for Industrial Purposes and the Whiskymag wheel’. I suddenly realise why whisky specialist and author Charles Maclean said that ‘no two noses respond in precisely the same way to an odour. I would encourage devotees to re-invent their own wheels’. So, next to a flavour wheel we have the aroma wheel ? This is not what Peter Klosse has in mind when it comes to aromas in the field of research: ‘Aroma molecules are too volatile and hence hard to classify’.

Aromas and its surroundings

‘Odours are very difficult to use in scientific experiments’, Klosse adds. ‘When it comes to analysing I mostly keep away from them. This is because the world of odours has no model and can’t be classified. Molecules are known for their volatility which in turn has to do with very precise temperatures. Where one molecule works at 19.4 ℃, another will only get active at 26.8℃. This makes the serving temperatures of products important. Also the length of time you keep a sip of whisky in your mouth is important. It can influence the model I am after to a great extent. But, don’t get me wrong, odours are important. Especially when you talk about sensoric observation. But even auditive and visual impressions have their say in our perception of taste. Not to forget our immediate surroundings.

The algorithm of taste

‘In our peer-to-peer economy we connect within seconds and tend to follow those people who fit our own tasting profile. In our scientific research we hope to find correlations and hopefully an algorithm of taste. We do have a theory what flavours are. We made a model for this and what we do is measuring the presence of flavours and how they work. Next we look at the way these flavours mute or intensify each other’. I am trying to imagine how this can work out for me as a lover of whisky: I pour myself a dram, hold up the glass to check the colour, sniff, sip and say: ‘Yeah….lekker’. I leaf through the pages of Peter’s latest work ‘The new Book of Taste’ (Het Nieuwe Proefboek) and read to the chapter called ‘Lekker’. (In Dutch, the adjective lekker connotes several positive attributes including nice, appealing and high-quality). Here he says: our senses register genuine taste. ‘There’s nothing wrong with our senses. Our experiences in life dictate our levels of enjoyment. And of course all this related to our tasting perceptions’.

After having spoken to doctor Klosse and having consulted a few experts like Angus MacRaild I feel more confident. I guess I will be able to resist the peer pressure at whisky tastings which led up to analysing, classifying and applauding too much. I might even get rid of my whisky fatigue syndrome by realising that it’s whisky’fun’ after all’. Together with a critical attitude and the right language at times I hope to have greased my whisky wheels again.

1 thought on “The world of flavours according to dr. Peter Klosse”