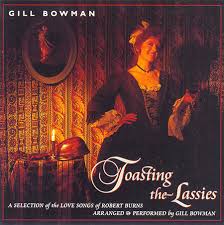 An Immortal Memory on the 263rd birthday of the Scottish poet Robert Burns. Ladies and gentlemen,

Tonight my theme will be ‘Burns and Love’, not quite a controversial free heading in these turbulent times of various #MeToo discussions and certainly a topic that can get out of hand with this ‘Jack of all trades’. My question is: would he have stood tall in the midst of all these #MeToo rhetoric or would our VIP Burns be one of the many celebrities who would have gone under in their hunger for female attractions ?

The sin of Rhyme

Burns was quite young when he embarked on his first love voyage in courting 14 year old Nelly ‘Helen’ Kirkpatrick by writing her a poem. Handsome Nell was written as an adolescent innocent pastime. He surely would have got away with this in our time. Much later Burns commented on this situation by saying ‘I committed the sin of Rhyme and fell in love’ and ‘She initiated me in a certain delicious passion’. But here, ladies and gentlemen,  the foundation was laid out for his everlasting boundless love for the ‘lassies’.

Robert Burns elaborated on this skill ‘to take women’ in his less known erotic poetry, the so called bawdy poems. Scottish poet Liz Lochhead, former Scotland’s Makar (poet laureate of Scotland between 2011 and 2016) was furious about the way Burns addressed his former girlfriend Jean Armour in a discourse between friends in a letter dating back from 1788. He wrote ‘giving her a thundering scalade [a military attack breaching defences] that electrified the very marrow of her bones’ and he added: ‘fucked her until she rejoiced’. Lochhead called Burns a Weinsteinian sex pest.Some reactions on Twitter played down her comments as Trumpian locker room banter.

Nine Inch Will Please A Lady

Burns audience for his bawdy banter was merely among his friends in the pub. Four years after his death the poems were published and probably went underground. In 1965 a new and final version was compiled on the basis of the only printed version left: The Merry Muses of Caledonia. Robert’s sin soared to ultimate heights in the poem ‘Nine inch will please a lady’.

Dug up from my old record collection I listen to a very earthy and raw Nine inch version by the Bum-Clocks from Leith (Scotland), the only Robert Burns tribute band I know. The sound of these boys is a mix of Johnny Rotten, the Brechtian punk cabaret band The Tiger Lillies and Iggy Pop. The name of the band is taken from the last stanza of the first poem of Burns’ Kilmarnock Edition, The Twa Dogs. ‘Ye olde Scottish name for a beetle, making us the Scottish Beatles’, says lead singer Tam Dean Burns. Being quite a rough boy from the country our Ploughman Poet would probably have enjoyed this musical interpretation.

No balls at all

Was Burns an overreacher in sexual terms ? Max de Haan, connoisseur and translator of almost all of Burns’ poems into the Dutch language and former professor at Leiden University, tells me with a smile that Burns was ‘well hung’, meaning that his equipment, his graith was OK. American soprano Claron McFadden strongly disagrees and tells a different story in Burns’ Blues. The lyrics (author anonymous) are open for only one interpretation: He (Burns) had no balls at all.

Producer Harvey Weinstein was called a predator by quite a few women on his hit list. Just before disappearing from the scene completely he had the cheeky guts to say that he didn’t understand all the fuss that was created around his person. Our bawdy Burns was more open about his behavior and described himself as a fornicator in his poem with the same title. Mitigating circumstances ?

Burns knew his sexual flaws and accepted the responsibility like a true Freemason. In one of his letters he described his struggle: ‘[…] I have a sore warfare in this world; the devil, the world and the flesh are three formidable foes’. And he comments on this last foe: ‘[…] but the third is my plague, worst as the ten plagues of Egypt’. Ladies and gentlemen, wasn’t it Burns fellow scribe Oscar Wilde who said ‘I can resist anything except temptation’ ?

Ladies and gentlemen, how does Burns do in the public eye – in comparison to other celebs like the 26 year old American poet Edgar Allen Poe who married his 13 year old niece Virginia Clemm ? Or what about Jerry Lee Lewis who married 13 year old Myra Gale Brown ? German composer JS Bach married his niece Maria Barbara Bach. The only celebrity that could equal our Scottish bard in responsibility would probably be Elvis. He dated 14 year old Priscilla Ann Wagner, later Priscilla Beaulieu, married her and left her quite some money when he died. Burns married his greatest love Jean Armour and they both had nine children. The last one was born on the day he died. Children with other girl friends were looked after, although money wise you could talk about crumbs. But still, a true gentleman, I dare to say.

Ladies and gentlemen. You might have strong doubts about our Rabbie Burns, but he did write about 80 poems to all the lassies he loved.